If we were to imagine for a second that Sketchup figures were blocks of cheese and the pencil tool a knife we can begin to reach new limits with what we can build. Cut The Cheese refers to a mindset you need to be in when using Sketchup to allow all possibilities to be tried and tested. Enjoy these challenges that explore 3D space and what you can do with it.

Backstory: Legendary Skateboarder Tony Hawk just got off the phone with you after winning his sweepstakes competition. Your school gets $250,000 for a new skate park that YOU GET TO DESIGN.
Tony wants you to consider the following things as you create your 3D design for him.
1. It should be realistic (nobody should be dying on this park)
2. It should include new amazing things like water features
3. It's gotta have the essentials like half pipes, ramps, rails, steps, full pipes etc...
4. It needs bleacher seating for crowds to watch him skate on the opening day
5. It has to be named after YOU
6. It should look realistically painted
7. 90% of the park should be built by you with downloaded trees etc... only used when needed.
WATCH THIS VIDEO TO GET IN THE RIGHT MINDSET
Then Watch the TUTORIAL if needed. THEN BUILD !

Carnival Cruise Lines has fired all their ship designers because they felt that students in schools were just as creative. Their contest is simple. Use Google Sketchup to design their new massive Sea-liner called "Sea Wolf" Which is set to sail the Caribbean next Spring.
Include:
1. Two deck top pools and tennis courts
2. Spacious windows for sea views on the hull for lower outer cabins
3. A large window for the dining room for sunset and sunrise meals
4. A large dance floor for the big band dances
5. A communications tower and station for the pilots.
6. A large docking area at the rear of the ship for Seadoos, scuba diving, and boat rides to shore
Watch this demo for hints then begin
Watch this video for creative ideas:

Carnival Cruise were so delighted with your ideas about their cruise ship "Sea Wolf" that they have decided to rehire you to help them with their first ever vacation resort. Rising from the sand at the ocean's edge are masive but uniquly designed towers with luxury rooms, some of which have balconies.
The resorts name is proudly placed on a huge sign visible from the ocean "La Grande Pomme De Terre."  Yes, "The Giant Potato" and it is sure to be a hit with New Brunswickers.
Carnival wants you to consider the following
1. Three large buildings for guest with rooftop penthouse suites and pools.
2. The buildings should all be connected by tunnel to the giant meal and entertainment centre
3. There should be pools and hot tubs of irregular but cool shapes
4. A large beach which meets the sea with plenty of beach beds and a shark free swimming area
5. A wooden dock leading out deep int he water for catamaran (boat) tours.
6. A beach drink stand for beverages (you can download a HUT for this)

Be creative and watch the demo or youtube video below if you are struggling to get started.

In April 2023 we will be sending humans to Mars for the very first time. Mars is our red planet that though similar in size is really very different. Mars is very cold at about -52 degrees Celsius and it's atmosphere is 95.3% Carbon Dioxide which just happens to be the poison we breath out. These harsh facts call for an amazing system of buildings to be created and connected if we truly wish to live on Mars.
YOU GET TO DESIGN "MARS 1" which will be home to the first Mars human life and maybe, just maybe, the first Martian Baby!!!!!!
Things to consider:
1. Outside the shelter is -52 Degrees C and 95% of the air is poisonous to humans.
2. Plants can help turn our CO2 production back into Oxygen inside the shelter (or we die)
3. People don't like to go to the bathroom with an audience and you may have to consider filtering urine and using other waste as plant food.
4. People typically like to have their own sleeping location especially if mission objective #1 is reproduction and growing the population.
5. The earth around Mars is red, so the structure should be a nice shade of white so it is easy to find after excursions around the planet. Also, there should be windows to allow sunlight in for the plants.

One Last Thing: Mars atmosphere of CO2 is poisonous to humans but amazing for plants who need CO2, Sunlight, and Water to create fruit, seeds, nuts, leaves, oxygen,  and even Maple Syrup! mmmmmm Maple Syrup. 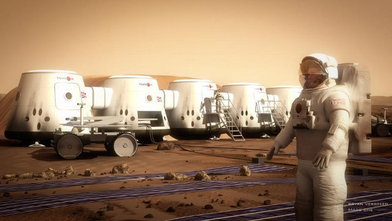